When the holiday comes, you do not just wear regular polish. It would be best if you looked exquisite in a unique mani that everyone envys. Whether you are celebrating virtually or with your friends, your nails always get noticed, and their look matters a lot. However, some people do not know the nail designs you wear on holidays and those you wear regularly. However, we plan to make your holidays this year better by introducing some of the best nail designs that you can try out. Furthermore, we do not intend to make you spend a lot because these designs use ordinary polishes like OPI nail polish, to mention a few. All you need is to shop for your OPI gel, SNS dip powder or any other festive polish and use it to transform your look into one of these elegant festive nail designs. 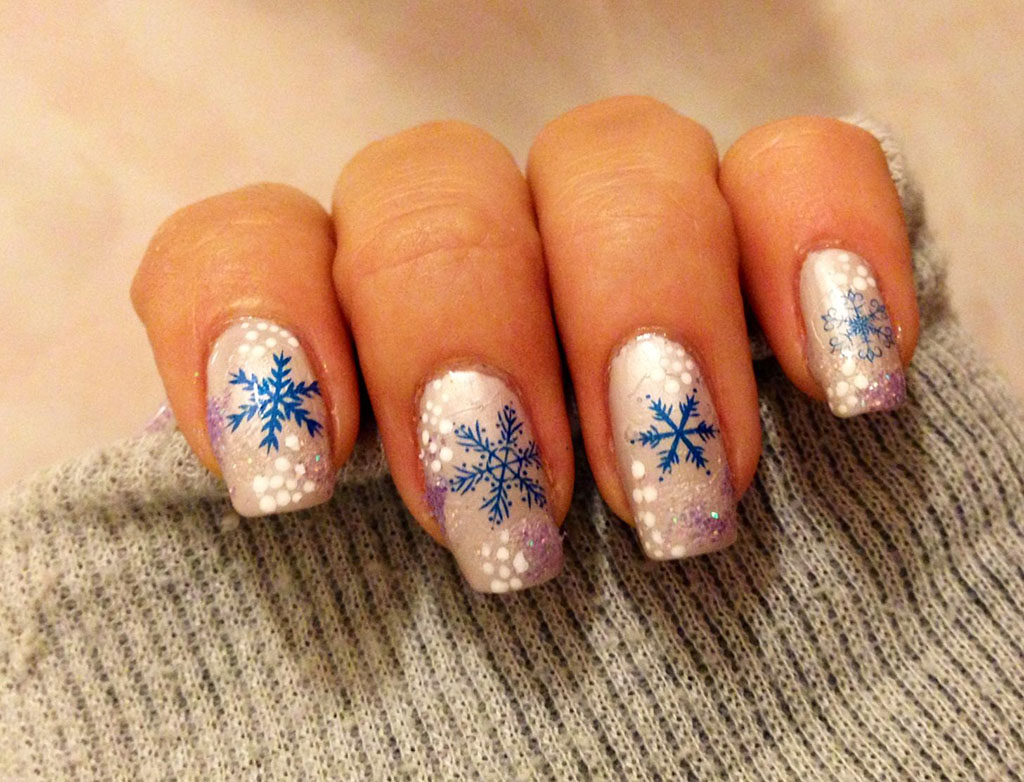 A change in weather is always expected, but it does not mean that all the cozy fun should go to your outfit when it is cold outside. You can become a little more creative and transfer the same fun look to your nails. The design is sweater-inspired; thus, you should match the same look with your best sweater. Besides, the design will stand out amongst your friends and family; therefore, it is worth trying. Nevertheless, you do not have to wear it during cold weather only. It is a festive and holiday design that you can use to rock your night outs and vacations. If you wish to try the design, the Vernis A Ongles OPI Nail Lacquer is an excellent colour to use. END_OF_DOCUMENT_TOKEN_TO_BE_REPLACED

How to Grow Strong and Beautiful Nails

Having fabulous looking nails is easy. You can either go to a salon and have your nails done by a professional nail technician or learn to do it the right way and have it done on your own at home and at your own convenience. Either way, you still have to spend some time to do a perfect manicure or pedicure. Nonetheless, however long-lasting the SNS dipping powder you use on your nails, the day will still come when you need to have your nails done again.

Constantly exposing your nails and your hands to some nail polish products, especially a LDS nails polish remover, may cause your nails to become brittle and weak in the process. So, how do you keep your nails strong while keeping your nails beautiful?

Let us show you how.

1. Keep your hands out of the water

Frequent hand washing and exposing your hands to water will over hydrate and expand your nails with the water that they absorbed. However, the nails will contract as the moisture dries up or evaporates. This leaves your hands and your nails drier with each exposure and causes your nails to chip or break easily.

You can use hand gloves if you would need to wash the dishes, or do things that will require you to use your hands. Make sure, however, that the gloves that you are using are thin and big enough that your hands will not sweat as this will also allow moisture to sink in the pores of the skin and the nail bed. END_OF_DOCUMENT_TOKEN_TO_BE_REPLACED

Group customs are pretty popular right now in the indie nail community. There are a lot of them I have admired even though there is no way I could afford to buy them all. When I saw Sara, the maker of Cupcake Polish, announce she was doing a group custom duo I was pretty excited. Cupcake Polish makes some of my favorite holographic polishes and I was even more excited when I saw the inspiration photos for the duo.

Sarah created two awesome and super saturated shades for the Cupcake Polish Lovers Facebook group. Both have incredible formulas lots of depth. I wanted to wait to post this to allow some time for current group members to purchase the customs before I posted about them here. But don’t worry! You still have plenty of time to purchase these. 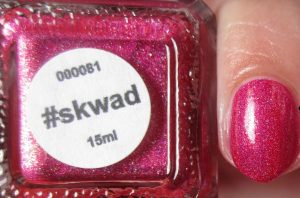 #Skwad is a super saturated cool toned fuchsia. It leans cooler toned than my photos show but my macro photo is closer to the actual color. The formula does lean a bit on the thicker side which is pretty typical for Cupcake Polish. However, it is still very easy to work with and is fully opaque in two coats. Top coat helps to bring out the holographic in #Skwad as well as the hint of gold shimmer. The gold shimmer looks a lot stronger in the bottle than it does on the nail and even though I’m a big shimmer fan I’m okay with this. I feel like a strong shimmer would take away from the beautiful bright color in this case. I do want to give a heads up that you’ll want to wear a good basecoat with this. My nails are a bit porous right now due to a bad experience with a sticky basecoat (That’s a story for another post.) I had a bit of temporary staining on the skin and nail with #Skwad so just take your usual stain blocking precautions and you should be fine. 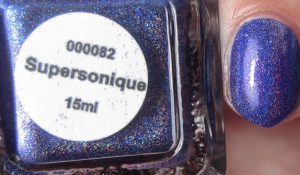 Supersonique is a super vivid cool toned purple. It reminds me of a slightly darker and more saturated version of Lilac You Mean It.  If you have Lilac You Mean It you will still be fine having Supersonique because they are different enough to not be dupes. Supersonique leans more on the indigo side than Lilac You Mean It does but is still very purple. This has a pretty similar formula to #Skwad and was opaque in two coats. The holographic in Supersonique is more intense than #Skwad and it has turquoise blue holographic sparks in it that stand out especially when you topcoat it. Again, you’ll want to watch out for staining with this one, especially if you have porous nails. I had purple tips for a few days, but ags I said, my tips are a bit damaged due to that crummy sticky basecoat incident. Basecoat is your friend! Just might want to avoid the sticky variety for these because the pigment doesn’t need any help sticking.

I really love these two polishes a lot. Oddly, I think I slightly prefer #Skwad which is funny because I was positive Supersonique would be the obvious favorite for me. Since I’m a terrible enabler I think you should really get both. I really love it when Cupcake Polish does these bright colors and it’s nice to have a bright that isn’t a neon. Both polishes benefit from having a glossy topcoat worn over them but  topcoat also intensifies the color. I don’t mind that topcoat does this but it’s something to be aware of.

You can only purchase these polishes through the Cupcake Nail Polish Lovers facebook group. They are available until July 14th so hope to it if you want them. I highly recommend them especially if you are a fan of bright, super saturated, nail polish like me. If you could only pick one which do you think you would choose? Or are you like me have no self control when it comes to polishes like this?

CrowsToes is a not a new indie brand by any means but is simply new to me. Shimmers are starting to come back which makes me very happy and I love that CrowsToes has some offerings for folks like me who still love multichromes. I have bought a handful of polishes from them s I will be showing them off gradually instead of doing one big post. 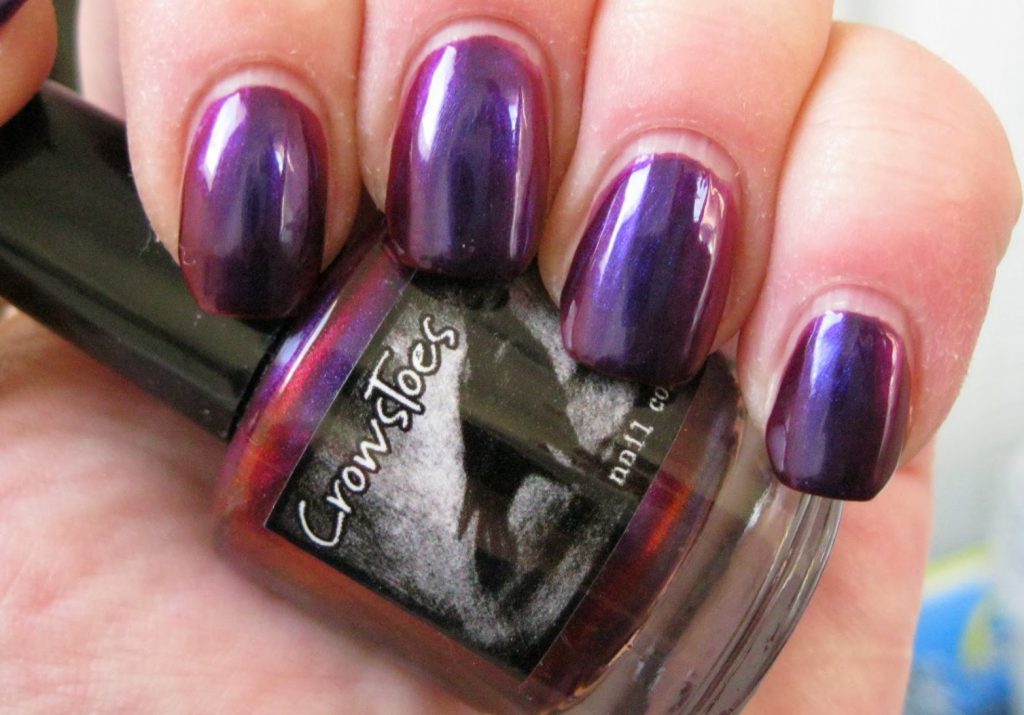 First up is, arguably, one of CrowsToes most popular multichromes, Indian Summer. At first I didn’t really think I needed Indian Summer because it looked a lot like ILNP’s Cygnus Loop. The two polishes have the same color shift and do look pretty similar. I think Indian Summer may be slightly more saturated. The biggest difference I found is Indian Summer has a much stronger magenta shift between the royal purple and red. It still has that royal purple, magenta, red, to copper shift to it that Cygnus Loop does. If you have Cygnus Loop you may be able to skip this one, unless you are a multichrome nut like me. If you wan more of that magenta shift between the purple and red you’ll want Indian Summer.

Indian Summer had a smooth, easy to use, formula that dried fairly quickly. There are a bit of brush strokes when you first apply the DND DC polish but most of them disappeared once the polish was fully dried. Topcoat will also help to smooth out those remaining brush strokes. Just for reference’s sake, my photos were taken without topcoat so you could see the polish in its natural state.

It took 3 coats for Indian Summer to be fully opaque on its own. Like with other multichromes you will be able to get it opaque in one coat. Sometimes I find adding the black base is more work unless you have a really nice one coat black polish. Some people say black base makes the color shift in multichromes stronger. I have not noticed that personally but it’s worth a shot if you want to save on polish.

This was the first time I have really been happy with my photos of a multichrome polish. I’ve found multichromes to be in the top three polish finishes to photograph because it’s not easy to capture the color shift and to capture the full spectrum of color shift takes some serious acrobatics with your posing and lighting. I’m disappointed I wasn’t able to capture the copper shift. It’s definitely there in person if you angle your fingers the right way. You are going to mostly see the royal purple, magenta, and red shifts.

I have been really pleased with the turn around time and customer service from CrowsToes. I have made two purchases from their website so far and both times my orders shipped in a timely manner, I received shipping notices and tracking. Everything arrived well packed and I liked that rubber bands that matched he caps were included for each polish. The smooth, short, caps were a bit difficult to open. However, CrowsToes is switching over to matte caps which I’m pretty happy about since they will be easier to grip.

What do you think? Are you happy to see makers still making multichromes?